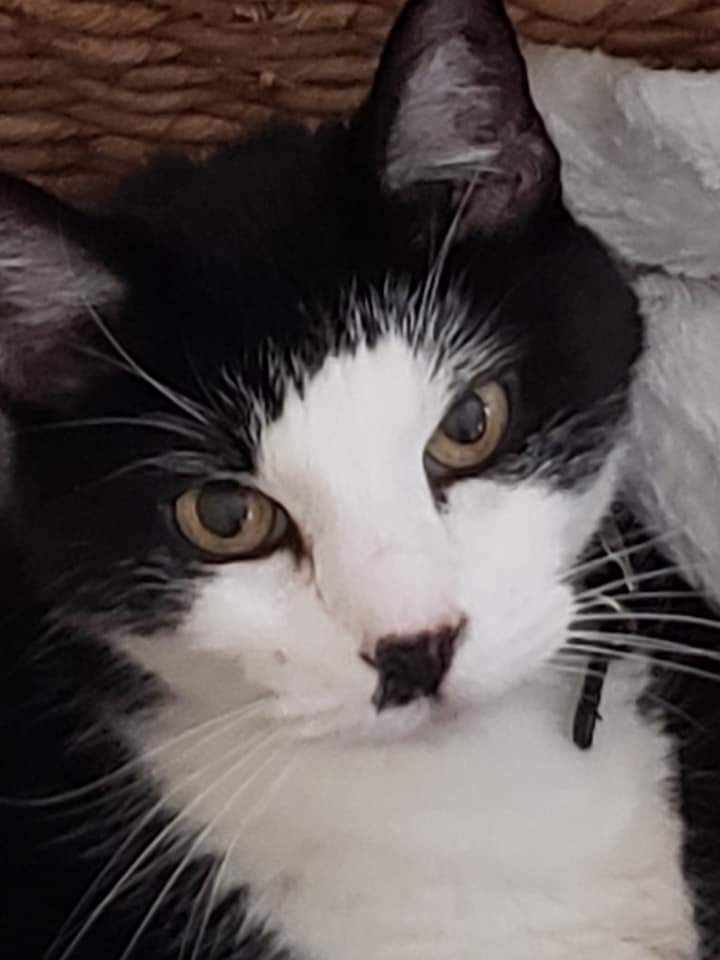 Skeet was a simple kitten from an average farm in NE Iowa. His parents were ordinary outdoor animals but Skeeter was anything but ordinary. He was mellow and did not have a wild bone in his body through and through. He accepted and was affectionate with anyone and any kind of animal. If he could have found a way to rub up against our Jardine Parrot in her cage he would have. Not sure what Abigail would have thought! My daughter trained him well as a kitten. He never jumped once onto a counter or end table or ever missed his litter box. Skeeter loved men, women, children, babies, dogs, cats, hamsters, rabbits. He was like a dog in that I was greeted every time I came home at the door. Talking away. When company or family came-same thing. He followed me to each room as I moved through the house. If I talked to him, he would meow back. Up on the bed he came when I went to sleep. His favorite spot was right in the fold of my arm. Once we were up in the morning, he’d meow that he would like fresh water and food in his dish. I obliged, lol. and he would enjoy the same food every day like it was his first taste. He could only have Purina Urinary Track cat food. He would be then come back at the bathroom door where I was getting ready wanting in. He had the gentlest touch with his big paws. He would frequently- sloooowly reach out his paw from the floor as he gazed into your eyes lovingly and would touch your leg. Well, I had to let him up on my lap no matter what I was doing. Once he was in my lap he always wrapped his one paw over my arm. You always felt he was happy, happy to see you and loved his loving home. He never tried to escape when the door was open. I loved his company when I put a leash on him and he joined me outside on the deck. I think he thought he was a king. 4 weeks ago he slowly stopped eating. He would have been 17 this July. Thought I still had a few more years with him. I wish I did. I would have prepared myself better. I am still getting used to my new norm. …….My family, friends and especially myself loved that cat and adored his companionship. I feel so blessed to have got to love this big boy and receive his love. He was truly a buddy.