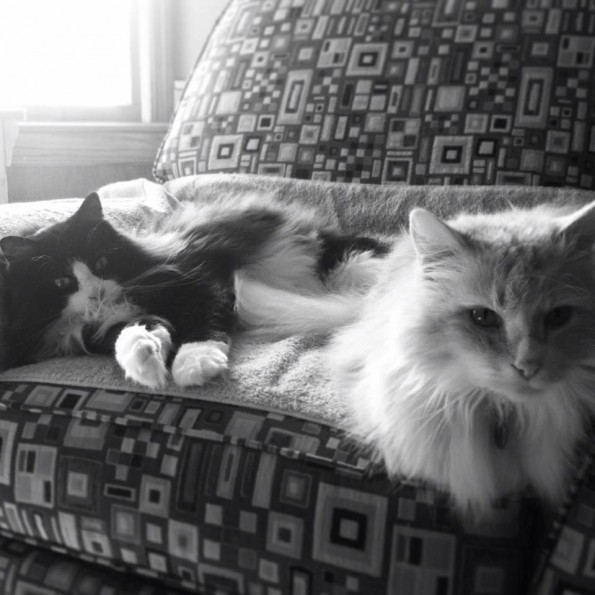 “Gus” aka: “Gary” is the handsome buff and white domestic medium hair on the right. He was the sole male member of a litter of kittens abandoned at Kirkwood near the Animal Health building and was taken care of by the veterinary technicians and assistant students. Gary was adopted just shy of his 1 year birthday and from day one had quite the boisterous personality. He wasn’t one bit shy of strangers. In fact, he made it his business to make his presence known and would seek out any new person in the home and plop down in their lap. Because of his mild disposition he was able to help save many feline lives by being a blood donor for 6 years!! Food was his major motivation in life and he would try to eat things any “normal” cats would turn their nose up at! Our home has been a much quieter place without him and he is missed dearly.

“Bernard” is the dapper tuxedo kitty on the left. He was adopted from the Animal Rescue League at just over one year of age and we brought him into our home. His previous owner had filled out a questionnaire about him and wrote that he was “afraid of nothing”. This was most certainly true. Nothing phased him, including being brought into a home with two new cats and one dog. His nonchalant and devil-may-care attitude allowed him to make ninja gymnast maneuvers on his housemates, angering them as much as it entertained us. Bernie was the supermodel of the pets as he would emit a loud chirp and go sit on the floor ducts when the air conditioning or furnace would turn on…allowing his glorious hair to blow in the breeze. Bernie will always hold a special place in our hearts.