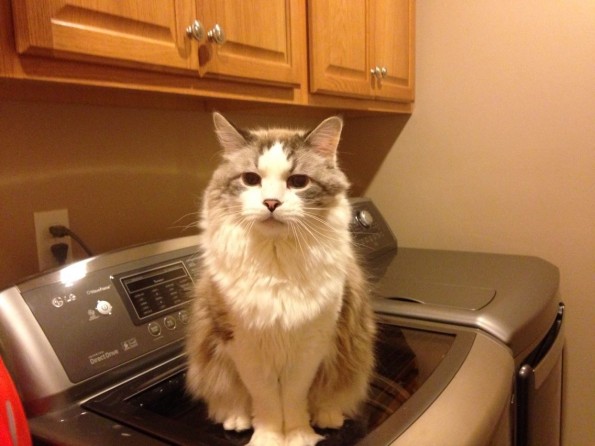 I brought Tiger home as a brand new tiny kitten between 7 and 8 weeks old. After having his first shots that day, he had a horrible reaction and became very ill that evening. After a couple of teary phone calls with our vet, I slept with Tiger next to my face all night, praying that he would make it through the night. The next morning, Tiger was just fine and he had stolen my heart forever! Tiger was a member of our family for over 17-1/2 years. One of my favorite things was the fact that he liked to be cradled in my arms like a baby. Sometimes he would lay back in my arms and stretch his front and back legs as far back as they would reach and i would rub his belly. Sometimes he would ever so gently reach his paw up to my face and touch my cheek , my nose, or my mouth. I remember the smell of kitty litter in his paws :-). Sometimes he would lift his face to mine to give me what i called “kitty kisses”, where he would just touch my face with his nose. I would kiss him back. One day he decided that he didn’t want my kisses and bit me right on my nose! His teeth were so sharp! I asked him why he was trying to pierce my nose?? LOL! I remember that he liked to be brushed…until he didn’t…which is when he would bite my wrist. That’s when we would be done brushing 🙂 He bit me a good one just last week, and I am sad to see the bite mark on my wrist disappearing 🙁 Saying goodbye to Tiger has been heartbreaking, but I look forward to seeing him again someday at Rainbow Bridge. – Tiger Smock 01/23/2016